Sabbathum Veteris Et Novi Testamenti: or, The True Doctrine of the Sabbath 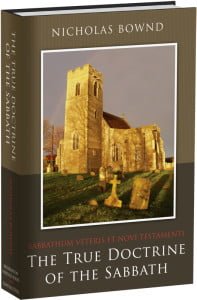 “For its scope, detail, and erudition, this work on the Sabbath is unparalleled in the Puritan tradition–indeed, perhaps even in the Christian tradition.” Mark Jones, author with Joel Beeke, A Puritan Theology: Doctrine for Life.

No book had more influence in confirming a Sabbatarian “heart” to Puritanism than that of Nicholas Bownd (d.1613). The Doctrine of the Sabbath was the first scholarly treatment defending the concept of the Christian Sabbath or Lord’s Day, later embodied in the Westminster Standards. Not reprinted since 1606, this influential work is presented afresh in a new critical edition.

For most of his ministry, Nicholas Bownd (1551?–1613) was the pastor of a country church in rural England. Judging from the sermons he published, his ministry exhibited the practical divinity taught by his stepfather, Richard Greenham, which focused on the means of grace. The crucial ‘mean of the means’ whereby all these means of grace were made available to the people of God was the weekly gatherings on the Christian Sabbath or Lord’s Day. In 1595, Bownd published True Doctrine of the Sabbath, which derived from sermons preached about 1586. This book embroiled him in a singular controversy with a troublesome neighbor, which resulted in the first Sabbatarian controversy in England, and also led to a vindicating expanded edition in 1606. For the last two years of his life he ministered at St. Andrew in Norwich, the highest call a man of his puritan convictions could have attained in those days.

“It is astonishing that the Puritan Nicholas Bownd’s famous work on the Sabbath, which greatly influenced later Puritanism and the Westminster Assembly, and by extension, Western Christendom for centuries, has not been printed in a critical edition with modern typeface long ago. Not reprinted since 1606, this classic work emphasizes the fourth commandment’s morally binding character, the divine institution of the entire Sabbath as the Lord’s Day set apart to worship God, and the cessation of non-religious activities that distract from worship and acts of mercy. I am so grateful that it is back in print, and pray that it will do much good to restore the value and enhance the joy of the Lord’s Day for many believers around the world.”

“After four centuries of rest, Nicholas Bownd’s famous book on the Sabbath has re-Bownded. Attractively printed, this work is a critical edition of the 1595 version and the expanded 1606 edition. Coldwell has painstakingly collated and meticulously annotated the two so as to allow Bownd’s classic Puritan doctrine of the Lord’s Day Sabbath to be published afresh. Lovers of the Scriptures as interpreted by the Westminster Standards will rejoice. May all glory redound to the Eschatological Lord of Sabbath rest, as it did four centuries ago.”

–James T. Dennison, Jr., author of The Market Day of the Soul: The Puritan Doctrine of the Sabbath in England, 1532-1700; and Academic Dean and Professor of Church History and Biblical Theology, Northwest Theological Seminary, Lynnwood, Washington.

“Those with an interest in developments leading up to the formulation of the Sabbath doctrine taught in the Westminster standards will  benefit from this careful documentation and analysis of the views of Nicholas Bownd.”

–Richard B. Gaffin, Jr., author of Calvin and the Sabbath; Professor of Biblical and Systematic Theology, Emeritus, Westminster Theological Seminary.

Nicholas Bownd’s work, The True Doctrine of the Sabbath, occupies a hugely significant place among Puritan works on polemical and practical divinity. For its scope, detail, and erudition, this work on the Sabbath is unparalleled in the Puritan tradition—indeed, perhaps even in the Christian tradition. Particularly illuminating are Bownd’s “spiritual exercises,” which clearly had an influence upon the later Puritan attitudes regarding the practical implications of Sabbath-keeping and worship. As an added bonus to the content of this book, the editorial work on this book is first-class, and makes for far more enjoyable and easier reading than a simple re-print.

With all the Puritan and Presbyterian books expounding upon the fourth commandment which have been published or reprinted in the last four hundred years, it may be reasonably questioned why it is important to bring yet another work on the nature of the Lord’s Day into print again, particularly when few Christians today either believe, understand or appreciate the true doctrine of the Christian Sabbath.  The answer is simple enough. Nicholas Bownd’s books were the first scholarly, lengthy treatment articulating the Puritan Sabbatarian position, and he can fairly be said to have set the mold for the standard argument. The basic tenets he defended are enshrined in that last great set of Reformed symbols, the Westminster Standards. So while he certainly did not invent the doctrine, Bownd can in a sense be called the father of the later Puritan works expounding the fourth commandment. Consequently, his work is of significant historical importance and a new edition is at the very least warranted to aid the study of it. And personally, if for no other reason, I believe a good modern edition of this great work is appropriate out of simple gratitude for the author’s labors in the face of the difficulties of the times and the rather singular persecution he faced.

This project to bring Nicholas Bownd’s True Doctrine of the Sabbath to print in a modern version dates back over twenty years. The source was a poor University Microfilms, Inc. (UMI) photocopy of an equally poor microfilmed example of Bownd’s 1606 revised edition. This required considerable proof reading, and the original having all the problems of a late sixteenth century text made for a tedious job of editing. It was easier to keep shifting focus to other less difficult projects. However, as it turned out in the providence of God, the project needed this delay in order for new research to come to light, revealing more than had previously been in print about Nicholas Bownd. In addition, the editor’s “tool kit” required expanding in order to handle such an old text with the attending necessary research, which other projects afforded over the intervening years. Finally, when the push to get this project on a track to completion was undertaken in the last year or so, a final hurdle presented itself. The discovery of the letter Thomas Rogers wrote to Bownd in 1598 cast all in new light, requiring a late course change and a complete revision of the approach to the text of the book.

For the last nineteen years the intent was to bring Bownd’s 1606 edition to print. However, it became clear that Bownd had made at least one revision based upon a criticism Rogers had made in a 1599 sermon against Sabbatarianism. Using phrases from the surviving notes of that sermon, a few quick searches revealed that while never naming him at any point, all of the main criticisms Rogers made were addressed in the revision. In addition, the description of the 1598 letter, which had never been transcribed, indicated it contained references to Bownd’s 1595 edition. So even before obtaining a copy and transcribing the letter, it was clear that the 1606 text had to be carefully collated with the 1595 edition in order to discover changes directly attributable to Rogers’ criticisms. With a revised critical text noting the additions (herein denoted by large {braces} in the text and in the margins), it became clear that many of the 1606 revisions were made in order to address criticisms made in both Rogers’ 1599 sermon and 1598 letter. This discovery led to a considerable investigation of the dispute between Bownd and Rogers (which is known as the first Sabbatarian controversy in English literature), which resulted in a lengthy but hopefully informative introduction to this volume, now finally completed after all these years.

The text, keyed in the margins to the 1606 edition, has been revised, as far as possible without marring the author’s work, to reflect contemporary spelling, punctuation, and usage. Chapter divisions have been added. Words or insertions supplied by the editor are in [square brackets]. While a few less clear antiquated words or spellings are replaced with the modern equivalents after the first usage (e.g. “entreating [in treating]” etc.), generally changes to clearly archaic spellings are done “silently.” Scripture quotations are italicized,  as well as Latin words and some emphasis. While the original use of italics for all manner of emphasis created many difficulties (see the Analysis), I have attempted to untangle and trace all of Bownd’s references. An annotated bibliography is provided noting the library collections available to Bownd, as well as author, subject and Scripture indices….

Contents (there is also a lengthy table of chapters and subtopics in addition to bibliography, scripture, author and subject index).

Contents of The True Doctrine of the Sabbath    ix

Results of the Elizabethan Settlement    xxii

The Bownds and Richard Greenham    xxvii

The Ministry of Nicholas Bownd    xxxiv

The Market Day of the Soul    xxxv

The Works of Nicholas Bownd    xxxvi

The Works of Thomas Rogers    xlviii

Objections to the Propagandist Theory    lxxxi

To the Studious and Diligent Reader    9

Book One: The Ancient Institution and Continuance of the Sabbath    35

Book Two: The Sanctification of the Sabbath    285