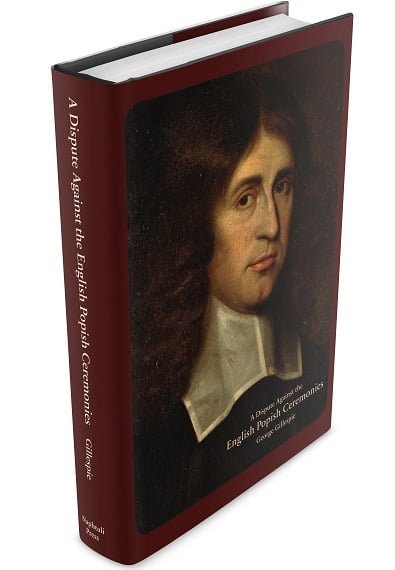 Sample Extracts (PDFs) of front matter and body of the work.

Naphtali Press is pleased to announce the publication of a new critical edition of George Gillespie’s seminal work, A Dispute Against the English Popish Ceremonies,available now. We first published this title twenty years ago and the book has been out of print for some time; but we are persuaded the need for it is still great. Written when “worship wars” involved real wars, the general principals presented by Gillespie have abiding pertinence and if properly applied could go a long way toward resolving the worship controversies of this day.

This extensively revised edition will mark the four hundredth anniversary of the birth of the author. The Dispute contains over a thousand citations from nearly two hundred authors and over three hundred works, which have all been carefully traced and confirmed for this new edition, greatly expanding the footnotes over those in the 1993 edition. With all these sources more clearly exposed for the modern reader, one may better appreciate why this 24 year old astounded his contemporaries on the eve of the Second Reformation, and why the Dispute merited a place for Gillespie at the Westminster Assembly of Divines, where he helped shape Presbyterian doctrine for centuries to come. 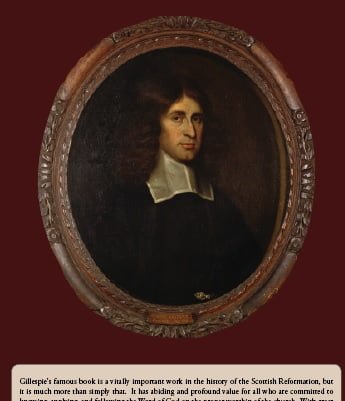 Gillespie marshals material from leading Reformers and Protestant works to defend biblical worship principles, from all the important writers of the time defending the English popish ceremonies, from classical literature, church fathers, scholastics, linguists, as well as from the leading Roman Catholic writers, commentators, anti Catholic and anti Protestant polemicists, and other works of the period. Even if one rejects the Puritan point of view on worship matters, this volume offers valuable insight into the important literature on all sides at this important period in church history.

This new critical edition retains Roy Middleton’s helpful Historical Introduction which explains the setting and why there was a need for such a book. This new edition adds an Overview & Summary, which analyzes Gillespie literary style, surveys the literature cited and gives helpful summaries of the different sections of the Dispute. The text has been collated again against the different editions, and as noted all the thousand+ references checked and traced (some turning into mini research project all in themselves), all the Latin has been rechecked and the translations provided for the 1993 edition confirmed, tweaked, or corrected. There are extensive indices of various sorts and a complete bibliography.

Gillespie’s Dispute truly remains a tour de force and one of the most important works on Reformed worship principles. Also, it is rare that a Christian work also factors as an important work in a nation’s history; and the Dispute certainly is a famous work in Scottish history as well as Covenanter and general Presbyterian history. This new critical edition seeks to do justice to such an important book and present it in a form useful for this and future generations to come.

A Dispute Against the English Popish Ceremonies by George Gillespie.

Why should a seventeenth century polemical study of ‘popish ceremonies’ be of any interest to readers in the twenty-first century, unless as a historical curiosity? The style of such works is complex and off-putting and the issues discussed apparently relics of a bygone day. To draw such conclusions would be a serious mistake. We live in a day when the biblical doctrine of the church is largely ignored, and the resulting ecclesiastical chaos is only too obvious. Though written more than three and a half centuries ago, Gillespie’s book gets right to the heart of the matter. Discussions of the right of the church to ordain ceremonies not prescribed in the Bible, the power of civil rulers to involve themselves in church affairs, the true nature of liberty of conscience—these issues and many more receive thorough examination. Adding to as well as subtracting from the requirements of Scripture is shown to be unacceptable. The perplexing issue of how to address ‘things indifferent’ is considered at length. Careful thought is given to the place of imitating the example of Christ and the apostles in ecclesiastical matters. All these and more are of pressing contemporary relevance. The style of the book of course offers challenges to modern readers, but Chris Coldwell has done an excellent job of minimising these difficulties in his painstaking editorial work. Gillespie’s treatise merits the careful attention of all who are seriously interested in hearing what the Word of God has to say in relation to the life and worship of Christ’s church: so gird up your loins and prepare to engage with a master theologian of abiding value. Rev. Prof. W.D.J. McKay, Reformed Presbyterian Church of Ireland, author of An Ecclesiastical Republic: Church Government in the Writings of George Gillespie.

Early in my ministry I had occasion to discover the riches of Puritan devotional literature. In the beginning of the seventeenth century in England, in Scotland, and in America, there was a real blossoming of Christian learning which, sad to say, was largely neglected by the time I had gotten to seminary. Happily much of this is now at the beginning of the twenty-first century beginning to reappear.

George Gillespie died young, never having reached his fortieth year, and yet he is recognized as one of the most articulate Puritans of his age. Hughes Oliphant Old, John H. Leith Professor of Reformed Theology and Worship and Dean of the Institute For Reformed Worship of Erskine Theological Seminary, and author of many books including the multivolume The Reading and Preaching of the Scriptures in the Worship of the Christian Church.

Whether one’s interest is historical studies or liturgical theology one cannot but be thankful for the work of Chris Coldwell in producing this new critical edition of the Scottish theologian George Gillespie’s English Popish Ceremonies, first published in 1637. The text is a revision of the 1993 edition which was also published by Naphtali Press. Gillespie’s copious citations of the church fathers, medieval theologians, Reformers, Roman Catholic apologists and contemporary writers have been traced and documented, the bibliography updated, the translation of the Latin proofed and adjusted. Remarkably, Gillespie wrote this monument of Reformed scholarship when he was but 24 years of age. Its publication was the key to his invitation to serve as a Scottish delegate to the Westminster Assembly, of whom he was its youngest member, not yet 30 years of age. Never did worship ‘according to Scripture’ receive a more comprehensive treatment; never did the regulative principle receive a stronger defense; never were Reformed liturgical theology and apologetics expressed more convincingly than in the hands of the man often called ‘Great Mister Gillespie’ in his own day. Terry Johnson, Senior Pastor, Independent Presbyterian Church, Savannah, Ga., and author/compiler of many books including the Trinity Psalter, Leading in Worship, and The Case for Traditional Protestantism, Reformed Worship.

Gillespie’s famous book is a vitally important work in the history of the Scottish Reformation, but it is much more than simply that. It has abiding and profound value for all who are committed to knowing, applying, and following the Word of God on the proper worship of the church. With great insight and passion Gillespie pursues the freedom of the church from political interference and from ecclesiastical tyranny as well as the freedom of the individual Christian conscience from the burden of tradition. He rejoiced that the Church of Scotland had gotten “rid of all such rotten relics, riven [torn] rags, and rotten remainders of Popery” and feared that they were now returning by political fiat. He warned, “there is not a more deceitful and dangerous temptation than in yielding to the beginnings of evil.” This splendid edition makes Gillespie’s demanding work more accessible to the modern reader and encourages careful reading of this vastly rewarding study. W. Robert Godfrey, President and Professor of Church History, Westminster Seminary California, and author of many books and articles, including, An Unexpected Journey: Discovering Reformed Christianity, John Calvin: Pilgrim and Pastor and (with James Montgomery Boice) Pleasing God in Our Worship.