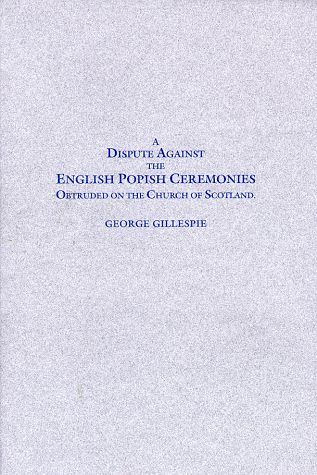 Hugh M. Cartwright, Professor of Church History and Church Principles, Free Church of Scotland College.Thank you very much for sending this magnificently produced volume. We do have access to many of these Seventeenth Century works here in Edinburgh and there is something quite nice about handling original editions, but I must say that for study I much prefer a modern scholarly edition of the calibre of that which you have produced with the additions which make it more accessible to the modern reader. It will take its place on the shelves (and in the recommendations to students) alongside James Durham on Scandal and I hope that your intention of producing new critical editions of other Seventeenth Century Presbyterians will come to fruition. They get to basic principles and it would be of great benefit to our generation of Presbyterians if they would make the little effort involved in acquainting themselves with their statement of these basic principles in order that they may be worked out in our present circumstances where the old battles are having to be fought all over again even in the Presbyterian churches.

This hansome volume is the first of a uniform Naphtali Press series, “17th Century Presbyterians,” to be comprised mostly of Scottish authors who have contributed significantly to theological and religious literature. The beginning volume of the series was published to coincide with the 350th anniversary of the Westminster Assembly of Divines (1643-1648).

Naphtali Press has chosen to turn first to the Westminster Assembly’s youngest divine, George Gillespie (1613-1648). English Popish Ceremonies was a historically crucial work written by Gillespie at the age of twenty-four, to the astonishment of both friend and foe in Scotland. In trenchant style, Gillespie divided his work into four parts, arguing against (1) the necessity, (2) the expediency, (3) the lawfulness, and (4) the indifference of the English-popish ceremonies that Charles I was seeking to impose upon the Scottish church. It is a detailed, masterful polemic against human innovation in public worship. The book “fell like a thunderclap, silencing any argument, except that of force, against which the Scots rose up in a defensive war.” The civil government burned and banned the book, and never answered it.

This new critical edition of Gillespie’s first renowned work will undoubtedly become the authoritative edition of English Popish Ceremonies. This edition has numerous advantages over past editions: First, a historical introduction by Roy Middleton (Free Presbyterian Church of Scotland) provides valuable background to the work. When one has finished the introduction, the question of why Gillespie wrote over five hundred pages on English popish ceremonies no longer remains. Charles I’s attempts to bring the worship and order of the Scottish church into conformity with the Anglo-Catholic Church had to be answered by those who were convinced that the episcopal system of church government led to church abuse. Middleton also effectively shows how Gillespie’s background was molded by providence to write and have published this particular volume in 1637, which in turn helped pave the way for the great historic events of 1638, often reckoned as the high-water mark in the annals of Scottish Presbyterianism. One could only wish Middleton had not broken off his introduction after the famous General Assembly of 1638, but had also informed us, albeit briefly, of the last decade of Gillespie’s life.

Second, the text of the 1637 first edition has been carefully compared and collated with the 1845 edition, which was based on the only other printing of 1660. Numerous defects and errors in the earlier editions, particularly in the footnotes, have been corrected. The work itself has been freshly typeset in larger, cleaner type than former editions. Extensive Latin quotations have been translated, but the Latin has been retained in footnotes. Other than these changes, together with the usage of contemporary spelling and some necessary changes in punctuation, the original text has not been tampered with. Helpful editorial notes and the defining of archaic or Scottish terms are notable assets to this edition. A glossary of such terms is also provided. Any editorial insertion, however, is clearly bracketed.

Third, there are a complete indix of Scripture passages cited, a lengthy and helpful subject index, and an extensive bibliography unveling as far as possible the particular editions of works quoted by Gillespie, together with page numbers indicating where the equotations occur [in EPC]. A Gillespie bibliography is also included.

Despite all these assiting tools and this fine edition, this book’s actual reading audience will primarily be confined to those interested in the study of the Second Scottish Reformation. The drawback of this work is of course that few contemporary readers will have the forbearance to cope with the polemical style of the seventeenth century. The style at that time was to completely demolish one’s opponent in every possible argument he had raised or possibly could raise, thereby leaving him no hiding place. As Macleod says of the brilliant Gillespie, “He virtually fought all his battles over again and thrice he slew the slain.” It can only be hoped that the resulting prolixity will not deter modern readers from reflecting on the crucial reformational principles Gillespie so powerfully upheld, particularly “that it is God’s right to order the institutions of worship in His church exclusive of any innovations man might impose, through conceit, ignorance, or good intention.”

This book still has lessons to teach us today, not only about the dangers of liturgical renewal movements and the church growth movement, but also about the need to retain the simplicity of scriptural worship at all costs. We would do well to ask ourselves the question: Are we allowing the simplicity of scriptural worship to slip through our fingers — perhaps slowly, subtly, almost imperceptibly — so that we are actually abandoning the very principles for which our forefathers were willing to live and die?