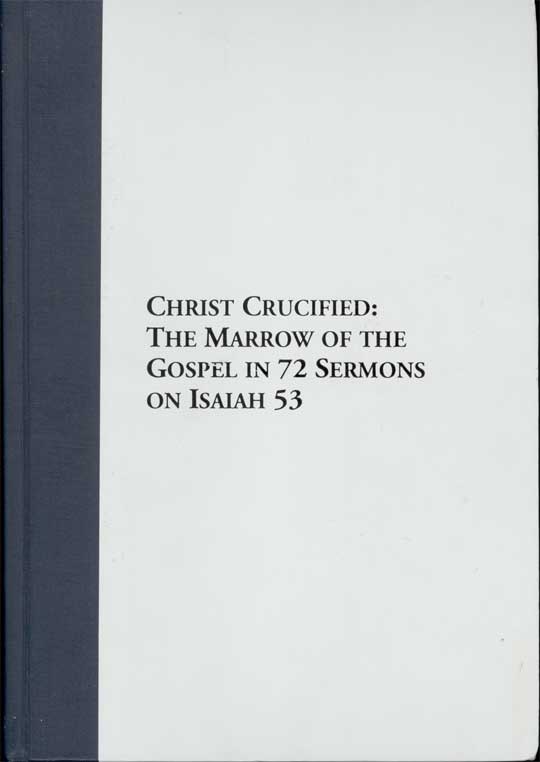 James Durham, The Marrow of the Gospel in seventy-two Sermons on the fifty-third chapter of Isaiah (Dallas: Naphtali Press, 2001) 704 pages, size: 8×10, hard bound. Table of Contents, Editor’s Preface, Life of the Author, Original Dedication & To the Reader by John Carstairs (68 pages), 72 sermon on Isaiah 53 (71-678), Glossary, Subject & Scripture Index (681-704). “This is marrow indeed. We need say no more: Durham is a prince among spiritual expositors.” Spurgeon.

See a fine review of the second printing at Miscellanies.

For the first time since 1995, Naphtali Press is back (in “Puritan style”), with the publication of James Durham’s sermons on Isaiah 53, titled Christ Crucified: The Marrow of the Gospel in 72 Sermons on Isaiah 53. Two of Durham’s other works were published by Naphtali in earlier years: A Treatise Concerning Scandal (1990), and Lectures on Job (1995).

James Durham (1622-1658) was a Scottish Presbyterian, who, having studied theology under the notable David Dickson (professor of divinity at Glasgow), was licensed to preach the gospel, and received his ordination in 1647. He served for a short time as chaplain to King Charles II, before ministering in Glasgow, predominately in the Inner-Kirk of Glasgow Cathedral. It is said that he gave himself so much to the work of the ministry, that it brought about his death at the young age of 36. But when he died, he did so embracing his Savior’s promise of John 6:37: “Whoever comes to Me, I will by no means cast out.”

In this hard bound (8 x 10) 704 page volume (including a “Life of the Author,” the original “Dedication” of the book, as well as a Glossary, and Subject and Scripture indexes), we have 72 (verse by verse exposition) sermons on the 53rd chapter of Isaiah (which Martin Luther referred to as the Fifth Gospel, because it so clearly portrays the work of Jesus Christ). In this series, Durham covers a number of subjects, such as justification, sanctification, saving faith vs. non-saving faith, the relationship of faith and knowledge, the relationship between the covenant of redemption and the covenant of grace, etc., all the while continually focusing on the active and passive obedience of Jesus Christ, in His role as the Great High Priest. Typically Puritan, Durham preaches “Jesus Christ and Him crucified” (1 Corinthians 2:2). Naphtali Press is to be commended for bringing out this book. The cost of $75.00 is justified by the work itself; but it can presently be purchased from the publisher, as well as several Reformed book sellers at a discount. It is highly recommended.

Christ Crucified: The Marrow of the Gospel in 72 Sermons

James Durham preached the fullness of the gospel from Isaiah 53.

PCANews – Christ Crucified: The Marrow of the Gospel in 72 Sermons on Isaiah 53 by James Durham. Naphtali Press, 2001. $75.00. Reviewed by Dominic Aquila.In this day of sound-bite news, bottom line analyses, power point presentations and short and to the point sermons, most modern reader would probably be overwhelmed by 72 sermons on Isaiah 53. We are told that with the fast pace of communication, it I hard to hold the attention of the average reader or listener. That may be so, but then we would miss deep and important truths offered up in a book like this one. James Durham (1622-1658) was a Scottish Presbyterian preacher who made am impact in his day, even though his years were short. In the Editor’s Preface we read: “Scottish Presbyterianism in the Seventeenth Century had many bright and shining lights. Of these, James Durham, who shone brilliantly but briefly, ranks alongside the greatest of his generation, for his theological depth, faithful preaching, and particularly for his moderate spirit at a time when such was in scarce supply.” Charles Spurgeon, in his Commenting and Commentaries, said of Christ Crucified: The Marrow of the Gospel: “This is marrow indeed. We need say no more: Durham is a prince among spiritual expositors.” James Durham preached the fullness of the gospel from Isaiah 53, showing the unity of the message of salvation throughout the Scriptures. In these sermons we find not only a clear exposition of the text of Isaiah 53, but also the doctrine that flows from it. The infinite grace and love of God are clearly expressed and central in all of his sermons. For example, in Sermon 26 (from Isaiah 53:6, “All we like sheep have gone astray, we have turned every one to his own way, and the Lord hath laid on him the iniquity of us all.”) Durham proclaimed:

Every expression that the Prophet uses to set forth the grace of God in Jesus Christ to sinners, is more wonderful than another, because indeed everything he expresses is more wonderful than another. And there is so much grace and infinite love in the way of the gospel, that it is hard to know where there is most of it; whether in its rise, or in its execution; whether in the decree of God, or in Christ’s satisfaction; whether in the benefits that we enjoy, or in the way by which we are brought to enjoy them…It is a wonder, that he should be wounded for our transgressions, bruised for our iniquities…and that by his stripes we should be healed. And when he comes to explain this, and to show how it came to pass that Jesus Christ suffered so much, he holds out another new wonder, All we like sheep have gone astray, as if he had said, ‘would you know how it comes to pass that the Mediator behooved to suffer, and suffer so much?’ All we, the elect people of God, had gone astray like so many wandering sheep, as well as others, not one is excepted. And there was not another way to recover and reclaim us but this…To recover us when we were lost, Jesus Christ was substituted in our room by the eternal decree of God, and the iniquities of all of us who are his elect people, as to their punishment, were laid upon him.

This is no ordinary book of sermons. It is the type of book that you will enjoy reading over a period of time. Keep it on your reading table; use it as part of your devotional reading to help you meditate on and appreciate anew God’s great plan of redemption. Naphtali Press has done a great service for the Church in publishing this volume of sermons. It is producing other classic works that have been out of print but that should be read by bottom line, power point believers today. Standing on the shoulders of and learning from the great cloud of witnesses from the past will encourage us all in our growth in grace. CHRIST CRUCIFIED: THE MARROW OF THE GOSPEL IN 72 SERMONS ON ISAIH 53 (Dallas: Naphtali Press, 2001) hbk. 703pp ISBN 094107546X US$75 Reviewed by Rowland S. Ward, (The Presbyterian Banner, July 2002.) One of the great passages of Scripture is Isaiah 53, and one of the great expositions of it is by James Durham (1622-58). Durham was well educated and lived as a country gentleman. He was converted after only with reluctance attending church with his wife. After the wars with the English, he studied under the notable David Dickson and was ordained in 1646. He lost his wife early, and he himself died young. He was a most faithful and devout minister who laboured to promote unity among the ministers. He was highly regarded. He was a very diligent student and wrote a good deal. The Sermons on Isaiah 53 ran to 5 editions between 1683 and 1792, and are now reprinted for the ninth time. The work has been thoroughly done, with the text rest in modern orthography, with relevant footnotes, glossary and index. The technical aspects of paper and binding are splendid with large clear pages and good margins. The cost is high for the Australian market but there may be special pricing for the rest of the year ($US55) – see the website <www.naphtali.com>. As to the content, Spurgeon said: ‘This is marrow indeed. we need say no more. Durham is a prince among spiritual expositors.’ Being sermons there is a fair bit of repetition; indeed, 72 sermons on one chapter is a great amount. I would not recommend imitation. Yet Durham is dealing with the heart of the gospel, and there is much to inform the mind, warm the heart and encourage obedience. Christ is central. Students of 17th century Scottish Presbyterianism will also value this book, and several others in the series, as illustrative of the teaching of the old Scottish Reformed Kirk. There is a good deal to learn from the way doctrines were handled. Obviously not a book for everyone but it certainly should be in theological libraries, and others will profit from its well-ordered pages.