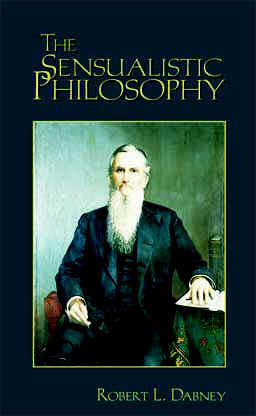 The following is the conclusion in a series by a reader of Dabney’s Sensualistic Philosophy. One of two works the Southern Presbyterian considered his best books, Dabney deconstructs the 19th century sensualists and positivists, and is prescent and devastating in his critique of atheistic evolutionary theory. The chapters on evolution are well worth the cost of this book alone.

The philosophy of the nineteenth-century sensualists and positivists–particularly Comte, Hobbes, and Mill–assaulted God and science with the same club. Thus, in deconstructing the premises of this philosophical strain, Robert L. Dabney upheld the causes both of God and science. Evolution theory is not simply unprovable and wrong. The theory attacked the foundations of Christianity: God creating Man in his own image, placing him at the head of an ordered Creation, with a foreknown Fall and Redemption, all for his glory. Evolution theory turned man into a soulless beast. Its proponents claimed solid, observable facts which were neither. The theory offered nothing to account for man’s God-directed spirit; and so, it attempted to gainsay the existence of both man’s spirit and God. The theory enthusiastically embraced random forces in lieu of God’s infinite wisdom and personal nature. Dabney refuted evolution theory’s adjunct, the evolution of civilizations, with historical examples. He denied that man progressed in development from savage to high civilization over time, but rather, that

“All the advancements made have been under the operation of moral causes: and these have always come by conquest, colonization, or in some other way, from some higher race without.” (R. L. Dabney: The Sensualistic Philosophy, Naphtali Press, 2003, p. 272.)

Dabney vehemently denied that the human mind is an organism, as evolutionists posit, but defended its structural unity as a “spiritual monad.” Dabney defended the human spirit as the center of consciousness against evolution theory’s relegation of consciousness to nerve bundles and organic processes. Evolution attributes the works of the mind to experience and environment; Dabney defended the mind as the efficient cause of perception. This is extremely important, because if the mind’s operations are subject to the vicissitudes of experience and environment, it can hardly be rational, reliable, or useful toward one’s advancement. Hedonism is the logical outcome of evolution. If all perfecting of consciousness comes through experience, and pleasurable experience is the most adaptive and likely to be repeated, then clearly hedonism is most conducive to jumpstarting the species. However, this is not observed in nature, and thus is problematic for evolutionists. No conflict exists between God and true science. “Nature implies the supernatural” is axiomatic to Dabney. God’s work manifests only absolute logic, reason, perfection, and virtue. Evolution is a theory that denies God and proper science because it posits in their place unconscious forces spinning off randomly occurring organisms. These, in turn, compete for survival in randomly assigned environments in a somehow self-existent world in which virtue is relative because it is defined solely by experience. The only good news evolution really offers is that you have no immortal soul that must endure this travesty of fatalistic flukes forever.

Without God-given reason, man has no ethical worries. Brutes have little faculty or use for moral responsibility, merit, or rational motives above instinctive impulses. But the sensualists whose philosophy underlies evolution do assign man ethical and moral responsibility. Therefore, their own arguments fail for want of acceptable conclusions.

Dabney enumerates some of the products of man’s consciousness we’d be missing if we were brutes who’d made it through Evolution 101:

“The spiritual love of Christian mothers, the heavenly charity which delights to bless an enemy, the aspirations of faith for the lofty sanctity of the skies, and even the redeeming love and divine holiness of Jesus of Nazareth are generically but enlargements of animal appetites in apes!” (p. 284).

”The spirit which looked out through a Newton’s eye and read through the riddles of the phenomenal world the secrets of eternal truth and the glories of an infinite God, went out as utterly in everlasting night as the gleam in the eye of the owl or the bat which could only blink at the sunlight” (p. 284).

Evolution theory is maddening to a Christian. It affronts God; it denies his work and perfect intelligence, and it cancels man’s promised destiny of glorious liberty with him. Nevertheless, Dabney counsels that we “be angry and sin not,” and refrain from “the gall of personal spite” (p. 248). Dabney does, however, raise his own indignation to a fair level, asserting, “Man’s soul is formed by its Maker not only to see moral truth, but to love it upon seeing it. It is an unnatural soul, a psychological monstrosity, which does not” (p. 249). It is sad indeed that an evolutionist might apprehend little more of the Gospel than one of his elevated simian prototypes, or “anthropoid higher apes.” Dabney presaged our own postmodern era, one in which Godless philosophy would drag science down with it and declare Man the lucky winner in a battle of dexterous digits. Postmodern man is still searching the ravines for those transitional thumb bones. Dr. Dabney ends this particular book without optimism.