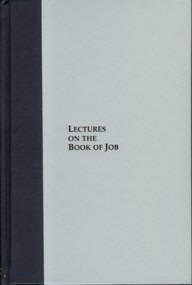 Lectures on Job, by James Durham (1622-1658). Case bound. 254pp. New Edition. 2nd Naphtali Press edition with table of contents, subject and scripture indices. Complete lectures on the whole book of Job. Retail $27.50. This title is out of print from us but Reformation Heritage Books may have copies remaining for sale until those are exhausted; then the title will be fully out of print. One of the rarest and sought after Puritan Commentaries. Part of the 17th Century Presbyterians series.

James Durham was a Scottish Presbyterian minister, who served the ministry a brief ten or eleven years, yet left behind quite a legacy. His books were very popular in Scotland and new editions of his works were published as late as 1840. No new edition of any of his books was published until 1990 when Naphtali Press printed his Treatise Concerning Scandal. Spurgeon in his Commenting and Commentaries, highly recommended all of Durham’s commentaries and sermons. The Lectures on Job are perhaps one of the rarest and hardest to obtain of the many Puritan works of that time. Spurgeon in his day was unable to find a copy, but he said, “It is certain to be good, for Durham is always admirable.” Durham comments on every chapter and ends each lecture with a set of uses or applications, which are alone worth the price of the book. This format, as many have told Naphtali Press, makes the book very useful for family devotions.

Part of the 17TH Century Presbyterians series. 17th Century Presbyterians is a series of titles by authors who left an indelible mark upon the history and culture of their age. Heretofore these theological masterpieces have not been issued in new critical editions. Each book in this series is bound uniformly in a distinctive three piece binding, and printed on high quality acid free paper.