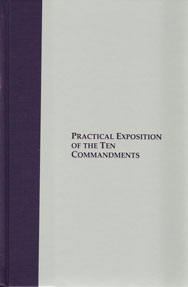 A Practical Exposition of the Ten Commandments, by James Durham. This title is back in print and available in a new edition published with Reformation Heritage Books.

Of Durham’s various books, it has been noted that they “were constantly read for almost two centuries. Twenty-six printing-presses in eight towns of Scotland, England, and Holland were occupied with them; in each decade between his death and the beginning of the nineteenth century at least one of his books was printed.” This resulted in about seventy publications of Durham’s various works. His exposition of the Law of God was the book most often published, amounting to thirteen editions. Of this title C. H. Spurgeon notes: “Whatever Durham has written is very precious. He has the pen of a ready writer, and indites good matter.” C. H. Spurgeon, Commenting & Commentaries (London, 1876; rpt. Banner of Truth, 1969).Durham’s Practical Exposition of the Ten Commandments was last printed 200 years ago in 1802. It was prefaced by recommendations from two well known English Puritan commentators of his day, William Jenkyn and Dr. John Owen (who had also written a preface to Durham’s Song of Solomon). Owen notes what those already familiar with Durham’s ministry knew well. Durham was quite excellent at handling “case divinity” or cases of conscience, as it is noted in many of the subtitles of his works.

Owen writes: “In particular instances, cases relating to daily practice are so distinctly proposed, stated and determined, as that the whole is a complete Christian directory in our walking before God in all duties of obedience. Let the pious reader single out any one duty or head of duties to make his trial upon, and, if I greatly mistake not, he will discern with what wisdom, and from what deep experience, his plain directions are managed, and do proceed.” The volume is rich in practical Puritan application of the Law of God.

This new edition retains all the original prefacing material by Owen, Jenkyn, and John Carstares, the original editor of the manuscripts of many of Durham’s works. The text has been revised as far as possible without marring the author’s work, to reflect contemporary spelling, punctuation and usage. Numerous paragraph breaks were added as well to aid the reader, and numbering of points and divisions were changed or added in an attempt to clarify the outline and flow of Durham’s expositions. The work has been completely indexed with subject, author and scripture reference indices. Comments on the text, obscure words or phrases, and historical background, have been noted by way of editorial footnotes.